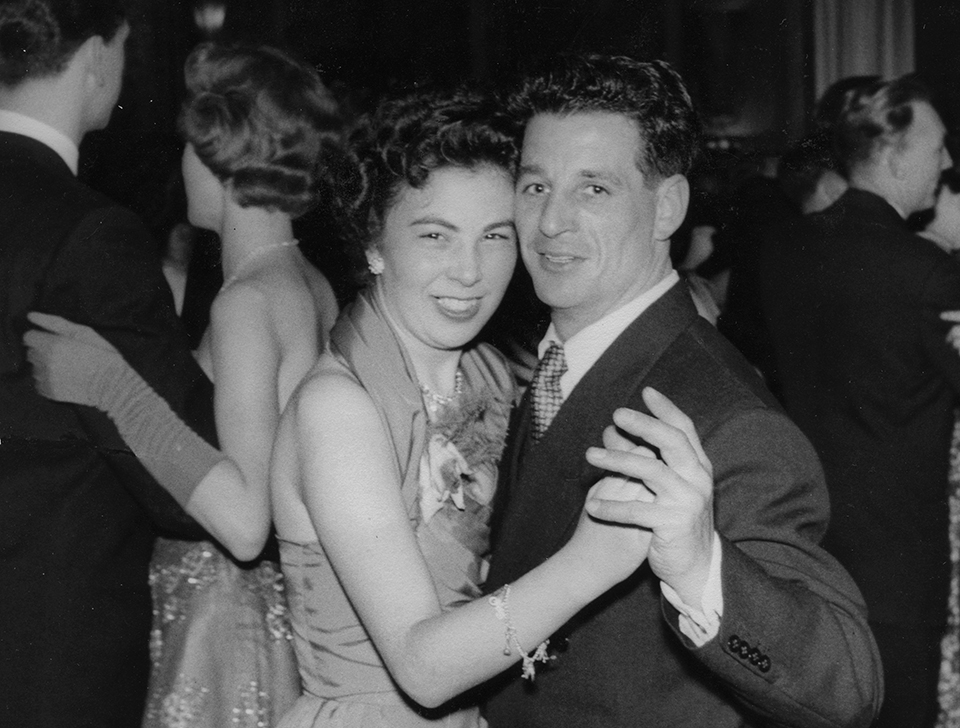 I started writing life stories because I was painfully aware that Alzheimers was stealing my dad’s memories.

As I missed out recording my dad’s stories, I wasn’t going to make the same mistake with my mum. We sat down and she told me her life stories.

What I hadn’t expected was that by writing a life story for my mum, it would be very helpful for her when she was also diagnosed with the cruel disease.

We named her book Lucky Charm. Her father had been very ill, but when he discovered his wife Mary was going to have to their second child, he was determined to be around to welcome the new baby. He made a full recovery, and he was adamant that the arrival of Iris was the turning point. She was, he said, his lucky charm

Born in Plaistow, she was a true Cockney, born in the sound of Bow Bells, and she lived her early years above an off-licence managed by her parents, close to the West Ham football ground.

Her parents were actually from south of the river, and when her father was offered the opportunity to manage The Brooklands Arms pub in South Lambeth, he jumped at the chance. It was the pub at the end of the street where he was born, and his brothers and sisters still lived there.

The pub was at the heart of the local community and the years at the pub were happy times. But there was one issue. The pub, popular with railway workers, overlooked the Nine Elms South Goods Depot and a railway turntable. It was a key strategic connection into London for the south west of England. It was so strategically important that was it that it was repeatedly target by the Luftwaffe during The Blitz.

Somehow the pub survived. During those dark days, the pub cellar became the gathering place for locals sheltering from the bombardment. Despite the dangers, my mum only remembered happy times and jolly sing-songs. The regulars undoubtedly were of the opinion that if you have to shelter, what better place is there than under a pub!

Mum told her stories of childhood and the joy of living amongst a large extended family. She recounted meeting dad (Jim) at a Pontins in Devon. He lied about his age as he was worried the age gap of seven years might put her off. She told of her pride in raising a family and all the stories and anecdotes that are so treasured by myself and my sisters.

Somehow the pub survived. During those dark days, the pub cellar became the gathering place for locals sheltering from the bombardment. Despite the dangers, my mum only remembered happy times and jolly sing-songs. The regulars, undoubtedly, were of the opinion that if you have to shelter, what better place is there than under a pub?

Bringing back the memories

Years later, after my dad passed away, and my mum’s memory began to quickly fade, she moved into sheltered housing. We moved in as many items from our family house to help her feel at home. And she had her book.

Whenever I popped in, she would show me the book. “They’ve written a book about me,” she would say. “I don’t know how they found out these things about me but all of it’s true!”

Sometimes I would point out that we had written the book together, but she wouldn’t believe me, and was convinced I was pulling her leg. I never minded. All that mattered was that she got pleasure out of reading her book – and it prompted those precious memories that Alzheimers steals away.

DementiaUK agree with the importance of a memory book for someone with dementia or Alzheimers.

DementiaUK make a very interesting point that it is best not to include pictures of the person’s parents who have passed away. Seeing a picture of their parents in the book can be confusing, and it can bring back the grief of losing them afresh.

This was my experience with mum. She would see her parents in the book and ask where they were. When I explained they were no longer alive it was very painful for her.

If a book is being used to help someone with dementia, please let me know and we can work out the best way to avoid unnecessary pain.

One solution is to have a full version of the book for the family, and an abridged version for the person with Alzheimers.

Aside from this, I can wholeheartedly say that the book was a source of great enjoyment for my mum, and I was so happy we did it together.

“When an old man dies, a library burns to the ground”
Proverb attributed to Malian writer Amadou Hampâté Bâ (1901-1991)